A Company carried out industrial radiography (X-ray and gamma) in its own radiography enclosures, and also at other locations using mobile equipment (site radiography).

Prior to this incident, there was a fault with the portable X-ray warning signals, which prevented site radiography work being carried out as planned. Consequently, managers instructed that this equipment should be pre-tested in the radiography enclosure. A method for this was devised, which involved connecting the mobile warning systems into one of the radiography enclosure systems. Using this method, the enclosure safety and warning systems (door interlock, audible pre-warning and exposure warning lights) were disabled, but the X-ray set could still be operated.

On the day of the incident, two radiographers were carrying out X-ray radiography in an enclosure. They went for a break, but left the operating key in the X-ray control panel. A different employee noticed the enclosure was empty, and decided to test the mobile safety systems using the above method for the first time.

No immediate investigation was carried out: the incident was reported 3 weeks later when the radiographer informed the Company of radiation burns on the ends of his fingers (see photograph below). 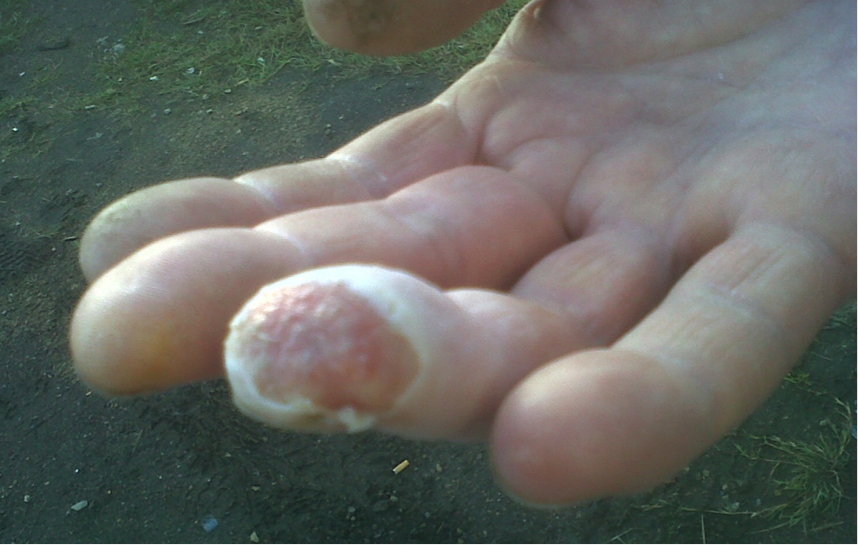 The radiographer suffered severe tissue damage to fingers on his right hand (see photograph). He did have surgery, but his fingers remain numb, with occasional tingling, although he has now been able to return to work.

The Company was prosecuted by the national regulatory authority, and received a fine equivalent to approximately €40,000.

Lessons to be learned

This incident could easily have been prevented and radiation exposures could have been much higher. Specific lessons learned from this incident include: