Description of the P-32 incident

A laboratory researcher was working with a phosphorus-32 solution in a fume cupboard. The solution was a routine delivery and was believed to contain 74 MBq of P-32. When the stock solution was removed from its shielding the portable radiation monitor placed in the fume cupboard by the researcher went off scale. He expected this because the monitor could only measure the much lower dose rates of diluted material. The monitor was then switched off.

The containers to which the P-32 was dispensed were placed behind Perspex shielding and the monitor switched back on. However, the expected drop in beta dose rate was not observed and the work was stopped and the supervisor was contacted.

Investigations revealed that the activity delivered was 1000 times more than was ordered, and as was stated on the package. A packing note did state the correct activity but this discrepancy was not noticed. 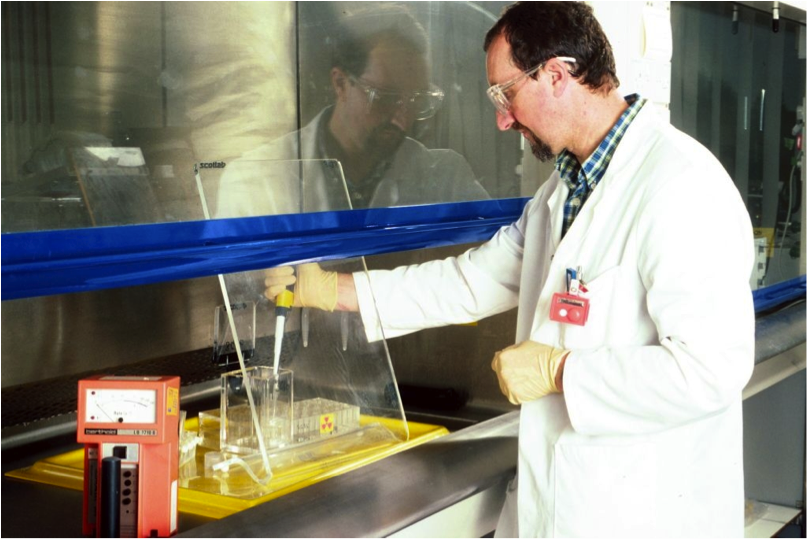 An example of a researcher dispensing a phosphorous-32 solution

Description of the P-33 incident

A research laboratory received a delivery of phosphorus-33 solution from the manufacturers, believed to be 9.25 MBq. Upon receipt of the material, the company’s standard procedures were to check all labelling and paperwork supplied with the package and then use a radiation monitor to confirm the activity of radioactive material received. During this procedure it was noticed that the colour of the solution was darker than usual. The paperwork appeared correct, but the dose rate at the surface of the vial was 20 times the usual reading of 0.5 μSv/h. The solution was not used, and the manufacturer was contacted.

An investigation and reconstruction of the P-32 incident concluded that there was no significant intake of activity, and that the external whole body dose was negligible. However, it was estimated that the researcher’s fingers had received doses of the order of 100 mSv.

For the P-33 incident, the procedures followed by the laboratory upon receiving the material prevented any significant radiation exposures.