During a previous inspection it has been noted that the door could be opened slightly before the interlock operated, and it was recommended that the interlock be inspected and repaired. The company had not done this, and the interlock had deteriorated further until it was possible enter the compound without the interlock terminating an X-ray exposure or sounding the alarm.

No abnormal doses were recorded on the dosemeters worn by the radiographers using the compound.

Following an investigation, it was concluded that it was extremely unlikely that anyone had entered the compound during a radiography exposure. However, it was noted that the incident provided the potential for a serious radiation accident in which very high doses, and even deterministic radiation injuries (tissue reactions), could have resulted. 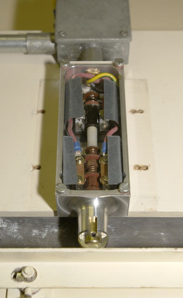 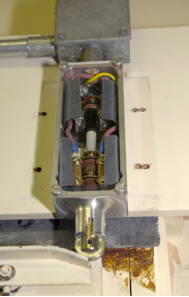 Photographs of two separate safety interlock swithches (with covers removed) installed above a sliding entrance door to a radiography enclosure. The switches work in opposite modes, ie as shown in the photographs.